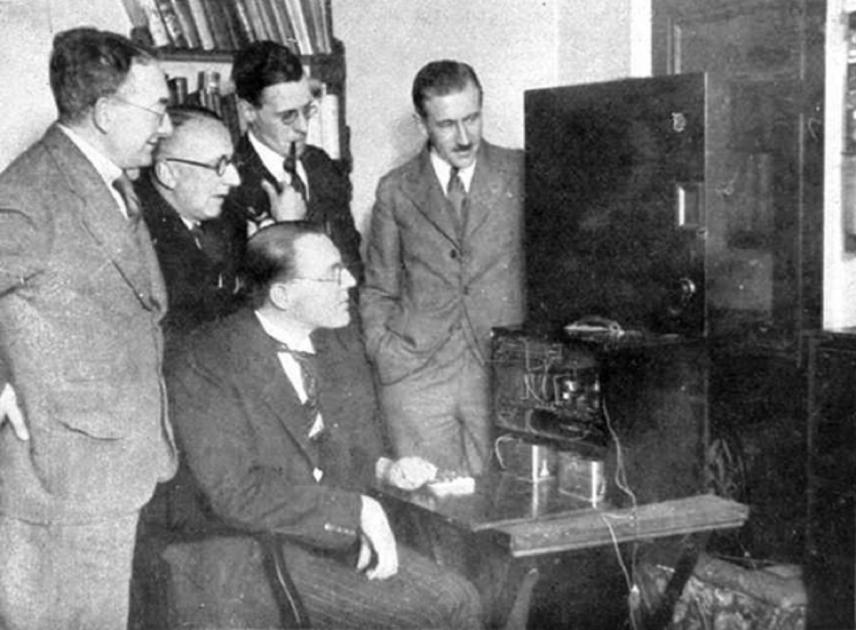 The Shipley Lounge has played a starring role in television history

On October 8, 1929, the very first television broadcast outside London was received – in the drawing room of a house in Shipley.

The first live sound and picture was received at Bankfield Drive – the home of Sydney Wright, radio department manager for Christopher Pratt & Sons in Bradford – and the Telegraph & Argus were there to capture the moment.

Three years earlier, on January 26, 1926, Scottish inventor John Logie Baird had demonstrated his working television for the first time. In 1929 it was decided that the BBC would broadcast television on a regular basis, with the Baird company carrying out the programmes. Television signals were sent from Baird studios in London via telephone lines to the BBC’s main radio transmitter. A week after the service was launched, the first official reception of these shows outside of London took place. It was organized by Harry J Barton-Chapple, who taught electrical engineering at Bradford Technical College before joining the Baird Company in 1928 as a technical adviser. Sydney Wright’s Shipley House, known to Barton-Chapple, was chosen to receive the broadcasts. Mr. Wright provided his own radio receiver and speaker.

The fascinating story of Shipley’s significant contribution to the development of film and television will be told at a ‘Secret Cinema’ event in the city on Friday 18 November. Participants are invited to meet on the market square (reservation essential) at 6:30 p.m. pm for the free event, which includes a screening of A Taste of Honey, directed by Oscar winner Tony Richardson, born in Shipley.

Shipley’s remarkable film and television history has been researched by the UNESCO City of Film of Bradford team as part of Being Human, the UK’s national festival of the humanities, which runs from 10 to November 19. The University of Bradford has been chosen as the hub of the festival, for a special program of events celebrating the BBC’s 100th anniversary.

Shipley’s role in television history and Tony Richardson’s contribution to Britain’s new wave of cinema are discussed in a Bradford City of Film podcast featuring Iain Logie Baird, grandson of inventor John Logie Baird of the world’s first functional television system. , and Dr Mark Goodall of the University of Bradford.

For this historic transmission from Shipley, there was, says Iain Logie Baird, about two minutes of sound and two minutes of vision: “They couldn’t have sound and vision at the same time – that only happened in March 1930. What they used at Sydney Wright was a portable television, about 2 inches x 2 inches x 1 foot, with a 4 x 2 inch picture, and its wireless set and speaker.

A T&A reporter, who was in Mr Wright’s living room on the morning of October 8 to watch the landmark broadcast, wrote: ‘At 11 a.m. the announcement was made that the television transmission was to begin. The speaker was off and the TV on. Through an opening measuring about four inches two points of orange light appeared. Quickly, the dots passed in front of the eye until all that was seen was a square of orange light.

A fit here, then the dots formed into the shape of a man’s face. Another adjustment and the face became recognizable. Fascinated, the three or four people in the room watched him turn his head from side to side, open his mouth, raise his eyebrows, laugh and frown. It was hard to imagine that vision being projected 200 miles into the air.

The man has disappeared. In its place came another vision. Still a man’s face, which in an instant was easily recognizable as a profile of the Prince of Wales.

David Wilson, director of Bradford City of Film and Fellow in Film at the University of Bradford, said: “It was such a pleasure to discover these fascinating stories about the development of television and the links with Shipley. And it was a great opportunity to remember the production of films made in the late 1950s and 1960s by directors like Tony Richardson and their importance in the development of British cinema.

“I have a particular interest in the continued development of world cinema through my position as an appointed researcher at the Qingdao Film Academy in China, and other links with the UNESCO Creative Cities Network.

“We are delighted to be working in partnership with the University of Bradford to bring all of the above together in a special screening as part of the Being Human festival, especially as this year’s theme is ‘Breakthroughs “.

Born in Shipley in 1928, Tony Richardson started out as a writer before becoming a theater and film director. In shaping the New Wave of cinema he was, says Dr Mark Goodall, “an important figure in the creation of British cinema as a cultural force”.

A Taste of Honey, Richardson’s film adaptation of Shelagh Delaney’s 1958 play, was filmed largely in Salford, leading to a new cinematic style of filming in streets and other locations, using cameras on tracks . “Bringing this new style into filmmaking was hugely important,” says Dr Goodall. It has been used in films such as Room at the Top, based on the novel by Bingley librarian John Braine, and Billy Liar, both filmed in Bradford.

Next month’s ‘Secret Cinema’ event in Shipley will feature footage from the Yorkshire Film Archive of the town being developed in 1961, along with ‘some secrets and surprises’.

An exhibition on Sydney Wright – “Bradford’s forgotten radio pioneer” – is currently running at the Shipley Library.

* Tickets for the Shipley Secret Cinema event are free but must be reserved at beinghumanfestival.org/events/secrets-cinema-once-upon-a-time-shipley