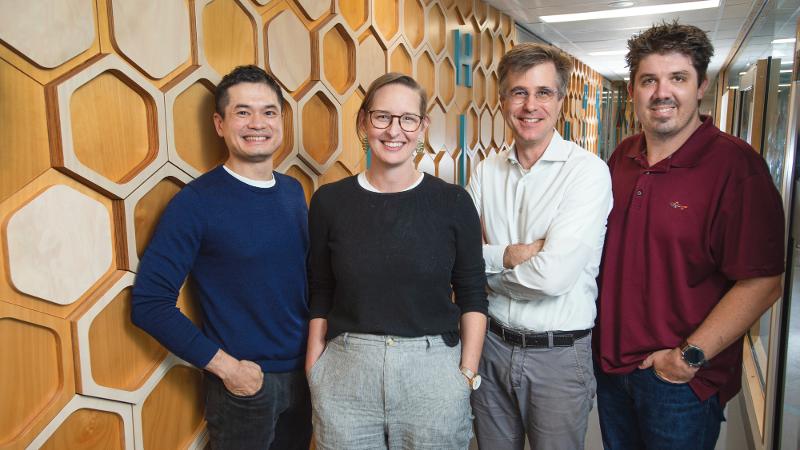 QUT researchers have used crossed beams of light to control chemical reactions in an advanced material, paving the way for future use in 3D printers that print entire layers, instead of single dots, at once.

Dr. Walden said light was a particularly desirable tool for activating chemical processes, because of the precision it offered for starting a reaction.

“Most of the work that QUT Soft Matter Materials Group researchers have done in the past with light has involved using a laser beam to start and stop a chemical reaction across the entire volume where the light hits the material. “, said Dr. Walden.

“In this case, we have two light beams of different colors, and the reaction only occurs at the intersection of the two beams.

“Normally, in a 3D printer, the inkjet moves in two dimensions, slowly printing a 2D layer before coming up to print another layer on top.

“But using this technology, you can activate an entire two-dimensional sheet and print the entire sheet at once.”

“This project aims to prove the ink’s viability for the future generation of printers,” he said.

Professor Barner-Kowollik, whose career has focused on the power and possibilities of light in materials science, was recently honored with Australia’s highest award for chemistry, the 2022 David Craig Medal, awarded by the Australian Academy of Sciences.

Professor Barner-Kowollik said one of the challenges of the project was to find two molecules that could be activated by two different colors of light and then make them react together.

“That’s where the innovation comes from,” Professor Barner-Kowollik said.

“You want a molecule to be activated with one color of light but not with the other color, and vice versa.

“It’s not easy to find, it’s actually quite hard to find.”

Dr. Truong, after much work, was able to find two molecules that reacted to lights in the required way and combined to form a very strong material.

“In our chemical design, both light-activated processes are reversible,” Dr Truong said.

“So we can control exactly when and where solid material can form.”

The researchers are from the QUT School of Chemistry and Physics.

/University release. This material from the original organization/authors may be ad hoc in nature, edited for clarity, style and length. The views and opinions expressed are those of the author or authors. See in full here.

Senator: Chief didn’t have a radio during Uvalde school shooting