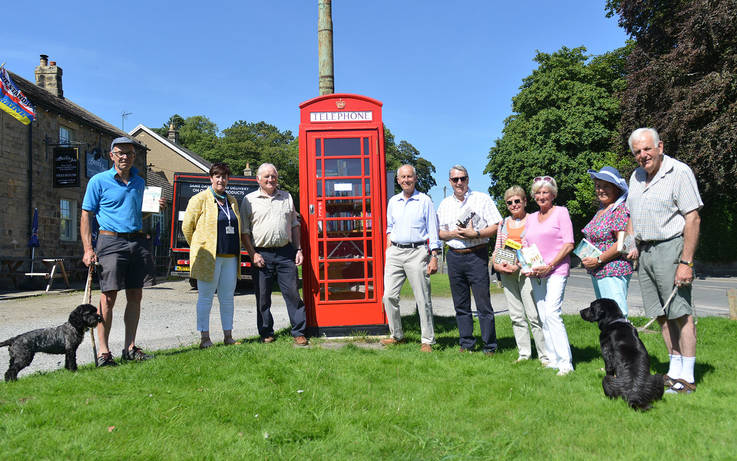 An iconic red K6 phone box has returned to Whorlton after a combined fundraising effort.
The new facility now houses a book exchange for the enjoyment of residents.
The village had its original traditional red box removed in the 1980s and replaced with a glass gazebo in a new location.
Parish president George Stasny, who has lived in the village since 1973, said: “Following a complaint that coin collectors were making too much noise at 3 a.m., many people were dismayed that BT had replaced the old K6 with a glass box.
“It was a clear case of BT crossing wires. The village was not consulted about the swap and many of us have long felt we wanted our red phone box back.
The parish council went ahead and bought the glass box from BT, then set about raising funds for a refurbished traditional phone box.
The Town Hall Community Association added £600 to the campaign while County Councilors George Richardson and James Rowlandson contributed £2,200.
A further £800 was raised through donations from residents and the parish council.
Last week, villagers converged on the box to add books and magazines to the exchange.
Cllr Richardson also attended the opening.
He said: “I think it’s a really good idea that fits in well with the village and what it’s for.
“A future idea could be to put a defibrillator in there.”
Whorlton Community Association chairman Chris Connolly added: ‘It’s brilliant. This is such a beautiful, iconic extension that showcases the village, and in such a beautiful location.
Cllr Stastny said the next item on the agenda was to move the village notice board and replace it with another to mark the Queen’s Platinum Jubilee. He also hopes Northern Powergrid will tidy up and paint the telegraph pole, having initially contacted them around 18 months ago and then again as recently as two weeks before the telephone box was installed.
Cllr Stastny said: “It’s really disappointing in a conservation area. I was told that it was added to a works program.

Bradford is a favorite location for TV and film crews