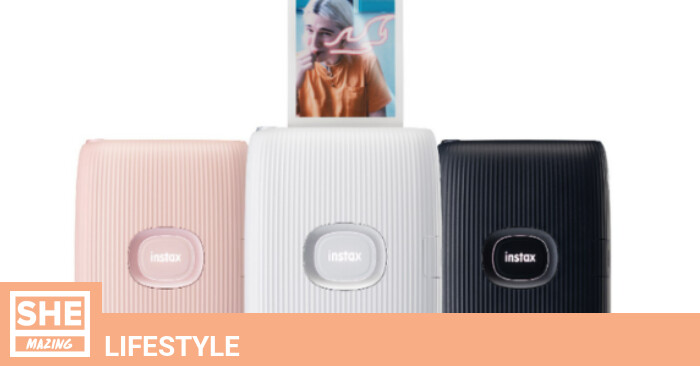 Instax mini Link 2 review: A fun smartphone printer for on the go

The instax mini Link 2 is the latest version of Fujifilm’s smartphone printers and has new creative features to bring your photos to life. The printer works via Bluetooth once you download the mini Link app. Instead of just printing your photos like a regular instant camera, the app has frames and other features to add creativity to your photos.

The instax mini Link 2 is available in Soft Pink, Clay White or Space Blue. I got to try out the Soft Pink printer which was a super cute color. The printer itself is very light and can easily slip into my purse. It would be great to use it on vacation or while traveling with a small bag because it is so compact.

As for battery life, instax says it can print 100 photos per charge, but I found the battery life to drop quickly while trying to master the Instax Air feature. Now that I mention the instaxAir, I will say that it’s fun to use and definitely adds a creative element to your shots, but can be a little tricky to figure out at first.

InstaxAir is part of the app’s Fun Mode. There is also a print mode. This lets you take normal photos or select photos you’ve taken previously and print them instantly like a regular smartphone printer. You can also take a photo of a video you have on your camera roll to print.

When you enable the instaxAir feature in the app, a green light will appear on the side of your printer. This is what is tracked when you point the printer at your phone. It will appear in your photo once you start “drawing” in the air by holding down a button on the top of the mini Link 2. It feels very similar to holding a spray can. On first use I tried to use this feature when the weather was really nice and the app couldn’t harm the green LED light, but once out of direct sunlight the drawing was fairly easy to do. If you don’t want to wave your hand in public while drawing in the air, the app also lets you draw with your finger on your phone.

There are 5 different graphics you can add to your Live Photos when using instaxAir. They include spray can, petals, neon pen, glitter and bubbles. Each graphic has its own sound when you use it and vibrates at the same time.

In the app’s Fun mode, there are lots of frames to choose from that can be added to photos you already have on your phone. There are Christmas, Halloween and birthday ones to name a few. I think the “Happy Birthday” frame would make a cute addition to a photo of you and a loved one to give as a gift.

There is also a collage feature similar to frames as it uses photos you already have on your phone, but instead of adding a border to your snaps, you can add up to 8 photos to a print. This is a great feature for keeping the memories of an occasion together on a single print or if you’ve run out of film.

The Match Test feature lets you take a live photo or choose one from your camera roll to check your compatibility with someone by answering a short question. It’s a fun addition to print over a photo but doesn’t show you your results until you hit print.

The final feature in the Fun Mode section of the app is the Sketch, edit & print section where you can take a photo of text from a book or something you’ve written, capture it and overlay it on a photo by you want to take. Again, a cool addition but instaxAir is definitely the most fun to use.

I was also able to try the Spray Art Instant Film which brightened up my photos with additional color rather than using the plain white film.

Overall the instax mini Link 2 was great to use, handy for going out and has some cool extras that I would use again. If you had to choose between buying a regular portable printer or this one, I would choose it only for the drawing, frames and collage functions, as well as being able to use it as a regular instant printer. The only thing I would like to see on it is a hand strap because when you wiggle the printer around it would be quite easy to drop it or bump into someone if you are in a crowded place.

Telephone and Data Systems (NYSE:TDS) shareholders are in the red if they had invested three years ago