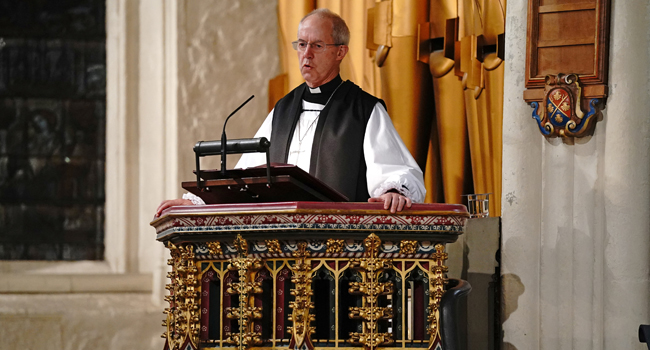 Church of England leader Justin Welby on Sunday criticized plans by the British government to send asylum seekers to Rwanda to process their claims.

The scheme sparked outrage and widespread criticism from human rights organizations and even the UN.

And Welby, who as Archbishop of Canterbury is the highest cleric in the Church of England, added his voice of dissent in his Easter Day address.

While “the details are for the politics and the politicians”, Welby suggested that sending asylum seekers overseas raises “serious ethical questions”.

“The principle must withstand the judgment of God and it cannot,” Welby said.

A country like Britain informed by Christian values ​​cannot “outsource our responsibilities, even to a country that seeks to do well like Rwanda,” the church leader continued.

It is “the opposite of the nature of God”.

When unveiling the policy last week, Prime Minister Boris Johnson had already suggested there could be legal challenges to the plans.

But the Home Office, or Home Office, which is responsible for implementing the policy, argued the current UK system was “broken” and pointed to unprecedented global migration pressures.

Johnson has pledged to do ‘whatever it takes’ to ensure the plans work – but the UN refugee agency, UNHCR, has condemned the scheme as a ‘flagrant breach of international law’ .

According to an exchange of letters published by the Ministry of the Interior, the senior ministry official, Matthew Rycroft, underlined on the eve of the announcement his doubts both about the “deterrent effect” expected of the device and its cost.

But Home Secretary Priti Patel said it would be ‘reckless’ to delay a move which ‘we believe will reduce illegal migration, save lives and ultimately break the gangs’ business model of passers”.

According to Rwanda, the British government will fund the deal to the tune of 120 million pounds ($157 million, 144 million euros) and the migrants would be “integrated into communities across the country”.

British media, from the left-leaning Guardian to the conservative Daily Telegraph, warned on Saturday that the policy could trigger a “mutiny” among officials tasked with getting the scheme operational.

For Tahsin Tarek, a 25-year-old glazier from Erbil, the capital of the Iraqi Kurdistan region, who is saving to finance a new trip to Europe, the British announcement is a game-changer.

“I will think of another country,” he told AFP on Saturday.

“Living here and enduring hardship here is better than living in Rwanda.

“I don’t think anyone will accept this decision and go live there. If they give the refugees the choice between being deported to Rwanda or their country, they will choose their own country.