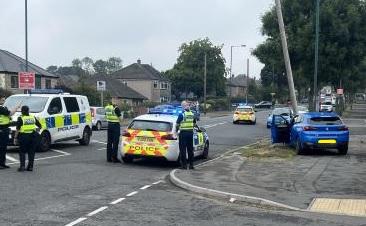 A car smashes into a telephone pole on Harrogate Road, Bradford

A ROAD had to be closed today in Bradford after a car allegedly hit a telephone pole.

The dramatic crash on Harrogate Road near Pullan Avenue in Ecceshill took place just before 10am today when a car heading for the town center reportedly slammed into a telephone pole.

He said: “I had just gone to the co-op for shopping when I saw the scene.

“It appears the vehicle hit two cars, one of which will be written off, and ended up hitting the pole.

“The road was closed until at least 3.30pm this afternoon as police continued to investigate.”

A Yorkshire Ambulance Service spokesperson said a call to the scene of the crash was received at 9.50am today.

The spokesperson said the collision also involved a car and a pedestrian.

“We sent a rapid response vehicle and an ambulance but didn’t take anyone to hospital.”

A bus company confirmed the accident closed the road in both directions and diverted bus services.

The T&A has contacted West Yorkshire Police for comment.

The local resident added: “There are regular accidents on this road. We should involve the councilors to do something about it.”

Do you have a story for us? Email [email protected] or contact us here.

Sign up for our newsletter to get updates straight to your inbox.

How to clean a 3D printer bed